Bill Maher thinks Obama deserves a little respect because he is President; Compared Bush to a child molester. 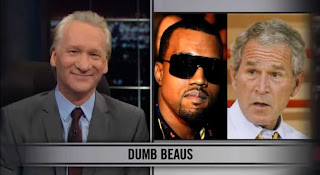 Maher on respecting Obama via Mediaite:


Martin Bashir identified the moment as part of a pattern over the past few years of conservatives attempting to make Obama out to seem more radical and liberal than he actually is. Kennedy tried to accuse liberals like Maher of holding a double standard, and if the same thing happened to Bush, they would be applauding. Maher disagreed, saying that he believes a certain level of respect should be given to the office of the presidency. Republican Dana Rohrabacher shot back, asking what Brewer said that was so horrible.

Maher on Bush via Daily Caller:


“You know I love him,” Maher said. “You know you can’t not. I mean coming in after Bush, first of all, you have him there, you have a guy you can relate to. He’s intelligent, he can speak English. I don’t think about George Bush at all anymore, which is great. He’s like an uncle who molested me and I blocked it out. You know? And you could just tell, you know, you’d like to have dinner with Obama. He’s an erudite guy, he’s a constitutional law professor.”

Oh I do respect the office he holds. I hold him personally however in utter contempt. I wouldn't shake his hand, wouldn't stand in line just so I could tell him how I feel[which would be a waste of time..in one ear out the other]etc. I would however condescend to wipe my ass with his book and most of the books about him. Since they mostly portray him as the second coming of christ.