Volt demand so low, dealers are refusing delivery from GM 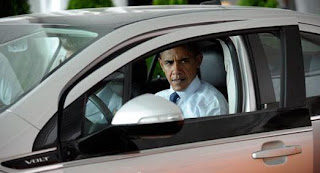 Every time the government tries to interfere in the free market system, things go poorly. If you can't sell a car with $7500 taped to the hood, it is a flop. Unfortunately, taxpayers will pay.


DETROIT — Some Chevrolet dealers are turning down Volts that General Motors wants to ship to them, a potential stumbling block as GM looks to accelerate sales of the plug-in hybrid.
For example, consider the New York City market. Last month, GM allocated 104 Volts to 14 dealerships in the area, according to a person familiar with the matter.

Dealers took just 31 of them, the lowest take rate for any Chevy model in that market last month. That group of dealers ordered more than 90 percent of the other vehicles they were eligible to take, the source said.

In Clovis, Calif., meanwhile, Brett Hedrick, dealer principal at Hedrick’s Chevrolet, sold 10 Volts last year. But in December and January he turned down all six Volts allocated to him under GM’s “turn-and-earn” system, which distributes vehicles based on past sales volumes and inventory levels.

GM’s “thinking we need six more Volts is just crazy,” Hedrick says. “We’ve never sold more than two in a month.” Hedrick says he usually takes just about every vehicle that GM allocates to him.

GM spokesman Rob Peterson confirmed that “dealer ordering is down” for the Volt. He said many dealers have been waiting for resolution of the National Highway Traffic Safety Administration’s investigation into the risk of fires in the car’s battery pack. Last year three packs caught fire in the days or weeks following government test crashes. Read more here...

What is evident is that whatever Obama puts his "seal of approval" on is sure to be a disaster.

I have been a GM buyer from the first car I bought back in 1977, but I will NEVER again own a GM product.