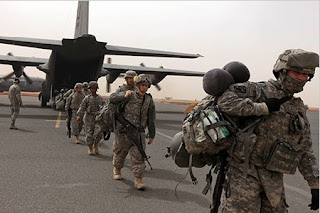 Preparations for hostilities with Iran?


The US Department of Defence have deployed 15,000 troops to the Middle Eastern state of Kuwait as tensions with Iran escalate over US and EU sanctions in response to Iran’s defiance to halt its nuclear programme, which claimed to have produced its first nuclear fuel rod earlier this month. On Monday the EU passed a ban on Iranian oil exports following similar action by the US on Iran’s oil and Central Bank.

Iran have now threatened to blockade the Strait of Hormuz, which 35% of the World’s oil shipments pass through and have been carrying out a 10 day naval exercise and missile tests. The US have stationed two nuclear powered Supercarriers in the Persian Gulf. Combined with the deployment of 15,000 troops it seems that the US is preparing for a potential conflict with Iran on all fronts.. Keep on reading...