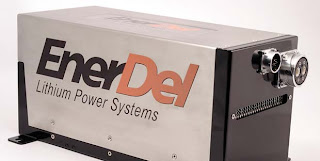 This time it is Indiana-based energy-storage company Ener1. They go a $118.5 million stimulus grant for their subsidiary EnerDel. It's almost as if President Obama was a community organizer and had no business experience. Oh!


An Indiana-based energy-storage company, whose subsidiary received a $118.5 million stimulus grant from the Energy Department, filed for bankruptcy Thursday.

Ener1 is asking a federal bankruptcy court in New York to approve a plan to restructure the company’s debt and infuse $81 million in equity funding.

“This was a difficult, but necessary, decision for our company,” Ener1 CEO Alex Sorokin said in a news release. “We are extremely pleased to have the strong support of our primary investors and lenders to substantially reduce the company’s debt.”

The company said it hopes the plan will “support continued operation of Ener1’s subsidiaries and help ensure that the restructuring will not adversely impact their employees, customers and suppliers.”

The Energy Department in 2009 approved a $118.5 million stimulus grant for EnerDel, a subsidiary of the company that develops lithium-ion batteries used in electric vehicles. The company has so far spent $55 million of the federal funding.