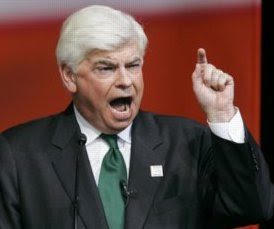 Former Sen. Chris Dodd is now the CEO of the Motion Picture Association of America and Hollywood's top lobbyist. Dodd has his panties in a wad because President Obama dropped his support for SOPA and PIPA.


(FOX News)- Hollywood's top lobbyist and former Sen. Chris Dodd is threatening to cut off campaign funds to President Obama's re-election effort because of anger over the White House appearing to side with tech companies in a bitter fight over anti-piracy legislation.
In an exclusive interview with Fox News, Dodd fired off a warning to Obama -- his former Senate Democratic colleague in this election year -- "don't take us for granted."
"Candidly, those who count on quote 'Hollywood' for support need to understand that this industry is watching very carefully who's going to stand up for them when their job is at stake," Dodd told Fox News. "Don't ask me to write a check for you when you think your job is at risk and then don't pay any attention to me when my job is at stake."

Dodd, who became CEO of the Motion Picture Association of America after leaving the Senate in 2011, noted the movie "Avatar" was stolen by online pirates 21 million times. Such acts, he said, threaten to decimate his industry. Keep on reading...

What ths blowhard should be railing about is the raw sewage that Hollywood dumps on us every single day and hour of the week whether on radio, tv or movie theatres.

He is worried that AVATAR was copied 2o million times? That worries me, too: anyone who took that ridiculous farrago seriously obviously needs medical treatment.

Sorry, Mr Dodd, this is all about corporate greed and increased government power and everyone knows it.