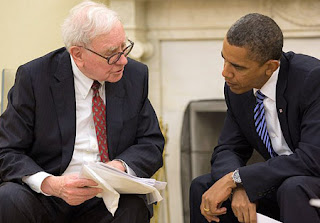 On of Obama's cronies is benefiting from an Obama decision? Who would have guessed?

With modest expansion, railroads can handle all new oil produced in western Canada through 2030, according to an analysis of the Keystone proposal by the U.S. State Department.

“Whatever people bring to us, we’re ready to haul,” Krista York-Wooley, a spokeswoman for Burlington Northern, a unit of Buffett’s Omaha, Nebraska-based Berkshire Hathaway Inc. (BRK/A), said in an interview. If Keystone XL “doesn’t happen, we’re here to haul.”

The State Department denied TransCanada a permit on Jan. 18, saying there was not enough time to study the proposal by Feb. 21, a deadline Congress imposed on President Barack Obama. Calgary-based TransCanada has said it intends to re-apply with a route that avoids an environmentally sensitive region of Nebraska, something the Obama administration encouraged.

The rail option, though costlier, would lessen the environmental impact, such as a loss of wetlands and agricultural productivity, compared to the pipeline, according to the State Department analysis. Greenhouse gas emmissions, however, would be worse.