For a third year in a row, President Obama is the most polarizing President ever 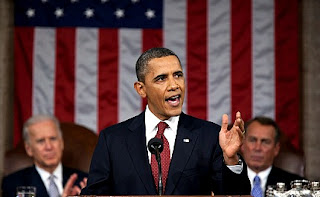 Gallop has found President Obama has a 68-point partisan gap in 2011. This is a new record for a third year President. Guess who hold the record for the first and second year partisan gap?


(WaPo)- President Obama ran — and won — in 2008 on the idea of uniting the country. But each of his first three years in office has marked historic highs in political polarization, with Democrats largely approving of him and Republicans deeply disapproving.

For 2011, Obama’s third year in office, an average of 80 percent of Democrats approved of the job he was doing in Gallup tracking polls, as compared to 12 percent of Republicans who felt the same way. That’s a 68-point partisan gap, the highest for any president’s third year in office — ever. (The previous high was George W. Bush in 2007, when he had a 59 percent difference in job approval ratings.)

In 2010, the partisan gap between how Obama was viewed by Democrats versus Republicans stood at 68 percent; in 2009, it was 65 percent. Both were the highest marks ever for a president’s second and first years in office, respectively.