Nancy Pelosi walks back “There’s something that I know." comment about Gingrich 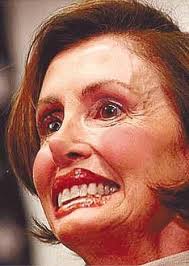 Apparently, Pelosi was bluffing and doesn't know squat on Gingrich. She now claims it just her “instinct.” More likely, it is a Botox overdose.


Washington (CNN) – Democratic Leader Nancy Pelosi Thursday dismissed the idea she knows something secret about former House Speaker Newt Gingrich that would disqualify him from being president, saying it’s just her “instinct” – based on the public record.

Pelosi ruled out Gingrich’s chances of becoming the GOP nominee Tuesday when she told CNN Chief National Correspondent John King, “He’s not going to be President of the United States. That’s not going to happen.”

“There’s something that I know. The Republicans, if they choose to nominate him, that’s their prerogative,” she continued. “I don’t think that’s going to happen.”

Gingrich, when asked about the comment Wednesday jumped at the opening to use a leading liberal as a foil and called on Pelosi to “spit it out” if she knows something about him.