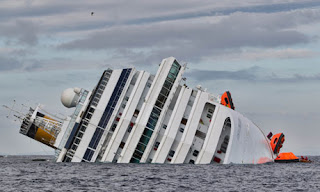 You just can't make this up.


The theme song from the film Titanic is said to have been playing in one of Costa Concordia's restaurants as the cruise ship began to list.

Yannic Sgaga and his brother Kevin told Swiss paper La Tribune de Geneve Celine Dion's My Heart Will Go On from the hit 1997 film was playing when the accident happened off the Tuscan coast on Friday.

"Images from the film Titanic are more realistic than one might imagine. They kept coming into my head," Yannic Sgaga said.

More irony from Google web search: (accent is mine)

www.costacruise.com/usa/costa_concordia.html
Cruise Ships at Costa Cruise. Experience the Costa Concordia cruise ship for a cruise vacation you will never forget.

Email ThisBlogThis!Share to TwitterShare to FacebookShare to Pinterest
Labels: irony