Will this make Al Gore's head explode? Extraordinarily cold winter temperatures at the North Pole is causing an ozone hole. 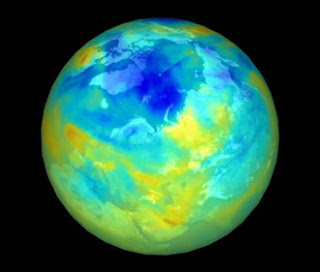 Extraordinarily cold winter temperatures at the North Pole is causing an ozone hole.


(Daily Mail) — The first ozone hole above the North Pole has been aggravated by extraordinarily cold winter temperatures, say scientists.

Cooling of the ozone layer enhances the effect of ozone-destroying substances such as chlorofluorocarbons — CFC.

A repeated ozone hole above the Arctic is to be expected, say scientists from the KIT Institute of Meteorology and Climate Research.

About a year ago, the scientists detected that ozone degradation above the Arctic for the first time reached an extent comparable to that of the ozone hole above the South Pole.

At a level of around 13 miles above the ground, 80 per cent of the ozone was lost, potentially exposing people on Earth’s surface to harmful ultraviolet-B rays from the sun, which can cause sunburn and skin cancer.

According to the study, occurrence of the Arctic ozone hole was mainly due to the extraordinarily cold temperatures in the ozone layer that is located at about 18 km height in the stratosphere, i.e. the second layer of the earth’s atmosphere.