The most do nothing Congress since 1947 actually increased spending by 10%. 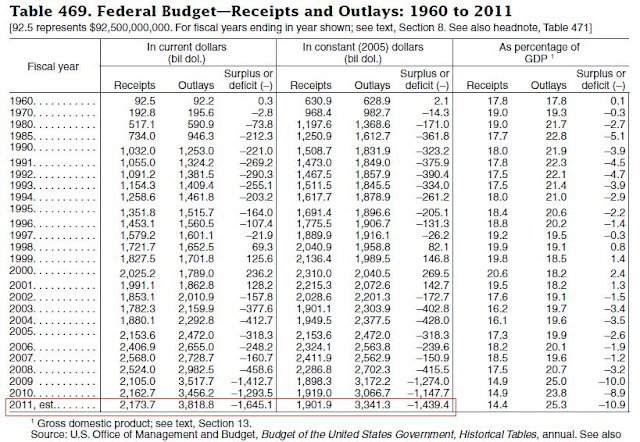 Democrats have accused the Tea Party members in the House of being extremists who hamstrung the governments ability to spend money. The facts dispel this lie. Spending increased by 10% last year. This made 2011 the year of the largest spending and largest deficits in American history.
Posted by Bluegrass Pundit at 6:13:00 AM

Oh, I don't know. They sure did one thing: the Republican and Democratic House and Senate just voted in December to destroy the Fifth Amendment by enacting a bill that authorizes the indefinite detention of Americans without due process, without evidence, without a lawyer, without nothing. America now joins Cuba, Soviet Russia and Nazi Germany in being able to haul off citizens into some unnamed gulag for the rest of their lives, merely on the president's say so.

Both the party of sodomy and abortion, the Democrats, and the part of war and usury, the Republicans, joined together to enact this horror which was dutifully signed by Obama on New Year's Eve.

The "land of the free" indeed.