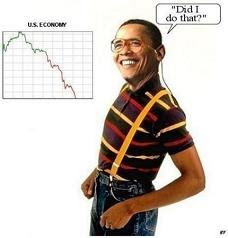 Obama does realize Bush has been out of office for over three years, doesn't he?


Obama pushed back against what he called Republicans’ “rhetorical flourishes,” including Newt Gingrich’s oft-repeated contention that Obama is the “food stamp president.”

“First of all, I don’t put people on food stamps,” Obama said. “People become eligible for food stamps. Second of all, the initial expansion of food-stamp eligibility happened under my Republican predecessor, not under me. No. 3, when you have a disastrous economic crash that results in 8 million people losing their jobs, more people are going to need more support from government.”

I hate to admit Bush did double the national debt, unfortunately I voted for him. I also hate to admit the facts that all that unemployment came from the Bush Administration, so yes the he increased the need for food stamps, but I have not really seen any programs by Obama to end the need for food stamps. The jury is still out on if bailing the banks helped or not. The fact is though America can not take four more years of nothing getting done to fix the problem. Maybe we do need a good third party to change directions.