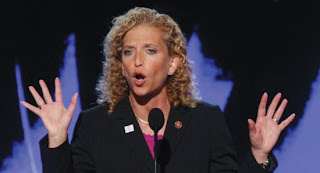 A Republican who was elected to statewide office in Massachusetts is "extreme?" DNC Rep. Debbie Wasserman Schultz must consider Karl Marx a moderate.

“Each of them are trying to out right-wing each other,” Wasserman Schultz told “Face the Nation” host Bob Schieffer.

The Florida congresswoman focused most of her attention on Romney. She said the former Massachusetts governor is a “dramatic contrast” to what President Obama offers the country.
Ahead of Tuesday’s Florida primary, she said “Romney is out-of-step with the priorities of Floridians.”

“Mitt Romney benefits from the tax loopholes that exist today and he wants them to continue,” Wasserman Schultz said. “That’s the dramatic contrast” to President Obama,” she said.
He is part of an “extreme Republican field” that would do nothing to “help homeowners remain in their homes,” Wasserman Schultz said, referring to the high rate of foreclosures in Florida.