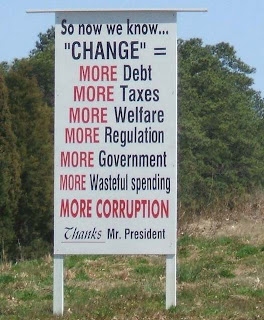 Is he serious? Does he really want us to finish that for him?


Yes We Did: Obama Deploys ‘Change Is’ Slogan — ABC News

Barack Obama campaigned for president four years ago promising “change we can believe in.”
Now, he’s running for a second term touting the ways that “change is.”

The emerging slogan for the 2012 campaign, on display during a high-profile New York City fundraiser Thursday night, thrusts Obama’s social and domestic policy achievements to the forefront of his re-election pitch.

And its appearance on new Obama-Biden campaign merchandise and apparel suggests the “change is” meme will likely be here to stay.

The messaging — unabashedly transcending criticism and disillusionment over what Obama has not accomplished — raises the stakes of the election for Obama supporters, reminding them that issues such as the health care law, “don’t ask don’t tell” repeal, and federal student-loan aid could all be rolled back if they don’t win.

“Everything we did over the last three years is now at stake in this election,” Obama told a crowd at the Apollo Theater, a line he repeats regularly before donors on the campaign trail.