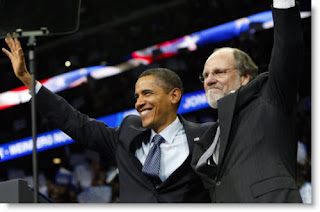 
According to Barack Obama's 2012 campaign website, Jon Corzine of Hoboken, New Jersey raised at least $500,000 for the president's reelection effort. Here's the listing:

Corzine, of course, has most recently been in the news for being on the wrong side of a $6.3 billion bet as head of MF Global. "MF Global filed for bankruptcy on October 31, after $6.3 billion in risky bets on European sovereign debt spooked investors and an effort to sell the company failed," Reuters reported.

go to you tube. look up bill whittle, then look for his latest vid "The Vote Pump"

on second thought..just go over to my page...it't embedded there. one post down from the top.