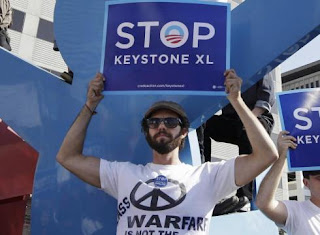 The Keystone oil pipeline is yet another issue President Obama is on the wrong side of with voters.


President Obama is on the losing side of the fight over building the Canada-to-Texas Keystone oil pipeline, with most Americans in two new polls favoring construction even if it is an environmental threat.

In one poll published Monday, Rasmussen found that 56 percent of likely voters at least somewhat favor the pipeline, with 36 percent strongly favoring it. Just 27 percent are opposed.

And in a new poll just out, Rasmussen found that even more, 59 percent, believe creating jobs is more important than protecting the environment, a sure sign of the economic plight in the nation. Just 29 percent say that the environment trumps jobs.