Starbucks: Would you like a latte with that gay marriage law? 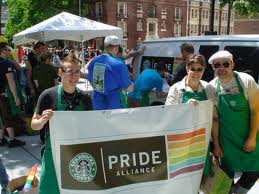 
Executive vice president of Partner Resources at Starbucks sent an email to business partners yesterday afternoon with the subject, "RE: A Message From Kalen Holmes: Starbucks Supports Marriage Equality"

The coffee megachain joins the likes of Microsoft and Nike, which also support the legislation...

The full letter is over at the Seattle Times.