The food stamp President who bailed out GM & Chrysler says in SOTU, "It’s time to apply the same rules from top to bottom: No bailouts, no handouts, and no copouts. " 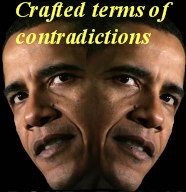 The hypocrisy and duplicity of President Obama is mind-numbing.


Borrowing the motto from General Motors, the president is to call for restoring the economy and an end to favoritism. In a sampling of remarks released ahead of the address, Obama says it’s time to end a system that benefits those who know how to game it — whether the biggest company or the lowliest worker.

“Let’s never forget: Millions of Americans who work hard and play by the rules every day deserve a government and a financial system that does the same.  It’s time to apply the same rules from top to bottom: No bailouts, no handouts, and no copouts. An America built to last insists on responsibility from everybody,” the president is expected to say.

President Obama steals a GM motto to make a case for no bailouts? Is he drinking or smoking weed?
Posted by Bluegrass Pundit at 4:50:00 AM