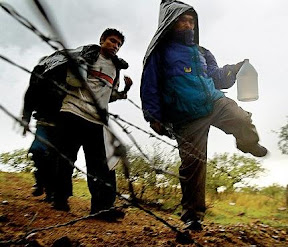 I wonder ho much that will cost?

The Senate early Saturday morning defeated the amendment to the budget resolution which would have put the Senate on record as opposing access to health care under Medicaid or the Affordable Care Act for undocumented immigrants who get a green card.

The amendment, which failed 43 to 56, was offered by Senate Budget ranking member Jeff Sessions, R-Ala.

All Democrats — including gang members Dick Durbin of Illinois, Bob Menendez of New Jersey, Charles E. Schumer of New York and Michael Bennet of Colorado — opposed the amendment. They were joined by Sen. Susan Collins, R-Maine, and Sen. Lisa Murkowski, R-Alaska. All other Republicans — including immigration negotiators Marco Rubio of Florida, John McCain of Arizona, Lindsey Graham of South Carolina and Jeff Flake of Arizona — supported the amendment.