Good News: Your smokes will not have scary pictures of blackened lungs and corpses 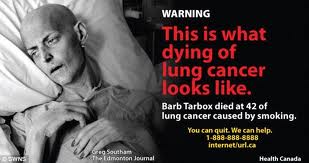 The FDA is backing down on the graphically scary pictures.

Instead of fighting in court for the nine graphically scary pictures of blackened lungs and corpses, the FDA will try a different approach, according to a letter from Attorney General Eric Holder obtained by the AP. The government will also not seek a Supreme Court review of the case.

Since the labels were proposed two years ago to persuade people to quit smoking, the nation's largest tobacco companies, including R.J. Reynolds Tobacco Co. and Lorillard Tobacco lawyered up by hiring the nation's top First Amendment attorneys and managed to halt implementation of the warning labels in the lower courts.

Advertisers sided with the tobacco companies and filed a friend of the court brief with the Supreme Court to hear the case to resolve rulings from two lower courts.

Advertisers argued the labels weren't factual, and were nothing less than government propaganda turning cigarette packages into mini-billboards that took up more than half of the space on the package.

What's up colleagues, how is all, and what you want to say concerning this piece of writing, in my view its actually remarkable in favor of me.