Who is up for a $150 million overhaul of Gitmo to make inmates happier... 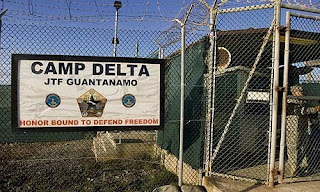 Not one dime.... let them starve themselves to death if they so choose.


The Pentagon is considering plans for a $150 million overhaul of the U.S. detention facility at Guantanamo Bay, Cuba — including building a new dining hall, hospital and barracks for the guards — as part of an ambitious project recommended by the top general in charge of its operations, officials tell NBC News.

The proposed spending spree comes amid mounting signs of unrest among Guantanamo detainees that lawyers say is threatening their  lives. U.S. military officials confirmed Wednesday that the number of hunger strikers at Guantanamo has more than tripled in the last two weeks — from 7 to 25 — and that eight of them are being force fed through tubes. Defense lawyers said in a letter to Congress this week they have gotten reports that “over two dozen men have lost consciousness.”

U.S. military officials denied any lives were in danger but acknowledged that resistance and frustration among the detainees is growing, a development that a senior general said is because they are “devastated” that President Barack Obama’s pledge to shut down the facility has not been fulfilled.

“They had great optimism that Guantanamo would be closed,” said Gen. John Kelly, the commander of the U.S. Southern Command, when asked about the hunger strikes during testimony before the House Armed Services Committee. “They were devastated, apparently… when the president backed off — at least their perception — of closing the facility.

Email ThisBlogThis!Share to TwitterShare to FacebookShare to Pinterest
Labels: Gitmo