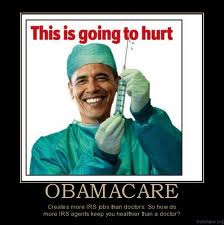 The more we learn what is in Obamacare, the more we hate it...


Health insurers are privately warning brokers that premiums for many individuals and small businesses could increase sharply next year because of the health-care overhaul law, with the nation’s biggest firm projecting that rates could more than double for some consumers buying their own plans.

The projections, made in sessions with brokers and agents, provide some of the most concrete evidence yet of how much insurance companies might increase prices when major provisions of the law kick in next year—a subject of rigorous debate.[...]

In a private presentation to brokers late last month, UnitedHealth Group Inc.,  the nation’s largest carrier, said premiums for some consumers buying their own plans could go up as much as 116%, and small-business rates as much as 25% to 50%. The company said the estimates were driven in part by growing medical costs not directly tied to the law. It also cited the law’s requirements that health status not affect rates and that plans include certain minimum benefits and limits to out-of-pocket charges, among other things.