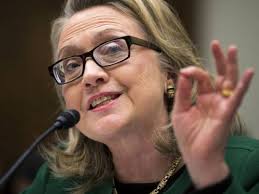 
Former Secretary of State Hillary Clinton became the latest politician to come out in favor of same-sex marriage on Monday, echoing similar shifts by President Barack Obama and other potential White House hopefuls as the issue gains public approval.

In a six-minute video released by the Human Rights Campaign on Monday, Mrs. Clinton said gay, lesbian, bisexual and transgender Americans “are full and equal citizens and deserve the rights of citizenship.

“That includes marriage,” she said. “That’s why I support marriage for lesbian and gay couples. I support it personally and as a matter of policy and law.”

By announcing her support for gay marriage in a very public forum as the issue wins new converts, Mrs. Clinton further fueled speculation that she is certain to launch another White House bid in 2016. She joins other potential Democratic contenders in supporting the right for same-sex couples to marry, including Vice President Joe Biden and New York Gov. Andrew Cuomo.