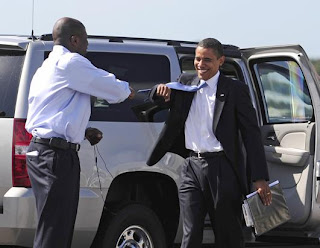 I wonder how much the security for this cost?


President Obama watched some Elite Eight hoops at the Verizon Center in Washington, D.C. on Saturday.

The president, fresh off a round of golf, was in attendance as Syracuse and Marquette battled to become the first Final Four team in this year’s NCAA college basketball tournament, according to pool reports.

The president was flashed on the big screen at the stadium and greeted with loud applause. Obama, sitting next to his former body man Reggie Love, smiled and waved.
The president didn’t pick either team to make it this far in the tournament. In his East Region bracket, Obama picked Indiana and Miami, both of whom were ousted from the tournament on Thursday.