Latest Democrat to discover they have evolved on gay marriage: Sen. Claire McCaskill 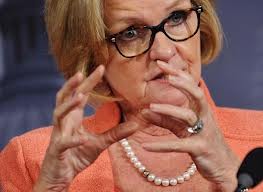 Proving, yet again, Democrats will say anything to get elected...


The question of marriage equality is a great American debate. Many people, some with strong religious faith, believe that marriage can only exist between a man and a woman. Other people, many of whom also have strong religious faith, believe that our country should not limit the commitment of marriage to some, but rather all Americans, gay and straight should be allowed to fully participate in the most basic of family values.

I have come to the conclusion that our government should not limit the right to marry based on who you love. While churches should never be required to conduct marriages outside of their religious beliefs, neither should the government tell people who they have a right to marry.