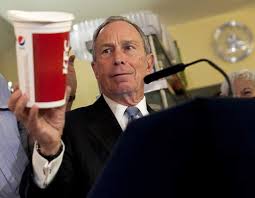 NYC Mayor Boomberg is most pleased...


New York’s big government — with its hands deep in taxpayers’ pockets and regulations controlling everyone’s lives — has made the Empire State the worst in the nation for personal liberty, a new study shows.

A war on sugary drinks is the least of freedom-loving New Yorkers’ worries, according a report by George Mason University, which rated the state No. 50 for the level of freedom its residents enjoy.

The university found New York’s government slams citizens from every angle — from huge taxes to tight controls on business to myriad rules on all kinds of fun.

“New York has, by a wide margin, the highest taxes in the country,” the report found.
The study cited New York state’s 14 percent income tax, well above the national average.
New York is also the most indebted state, with 33 percent of income dedicated to borrowing in fiscal year 2010, the report said.