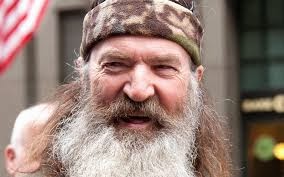 Phil Robertson is back on Duck Dynasty...

Via The Hollywood Reporter:


Phil Robertson, the patriarch of A&E's Duck Dynasty clan who was suspended from his hit reality series on Dec. 18 following some incendiary comments about gay people, won't be put on hiatus after all.

The network and the Robertson family announced Friday that Phil will still be part of the series -- and since he didn't miss any filming, his temporary suspension will have no effect on the upcoming fifth season.