Surprise: Pajama boy is a liberal... 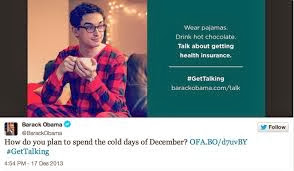 Would the majority of Americans prefer to raise their sons to be Pajama boys or Duck Dynasty boys?


Ethan Krupp, the little man who played “Pajama Boy” in a widely mocked Obamacare ad, once characterized himself as a “liberal f*ck.”
Krupp, an Organizing for Action (OFA) content writer who became the face of progressive America while wearing a onesie pajama suit, also remarked that gays “are all liberal f*cks” and criticized a “conservative gay pr*ck” on his now-deleted WordPress blog, entitled “Not Being Creative.”
“I am a Liberal F*ck,” Krupp wrote in one post. “A Liberal F*ck is not a Democrat, but rather someone who combines political data and theory, extreme leftist views and sarcasm to win any argument while make the opponents feel terrible about themselves. I won every argument but one.”