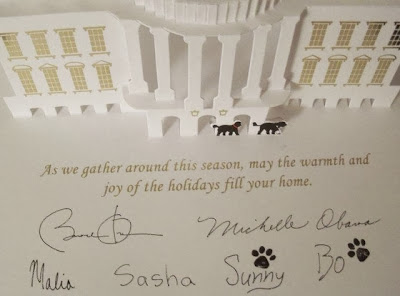 It's not like Christmas is celebrating the birth of Jesus. Oh, wait a minute...

Via The Bookworm Room:


There’s been a fair amount written about the Obama Christmas card. It’s a pop-up card, which has an expensive look that’s unseemly as millions lose their insurance and millions more have joined the ranks of the perpetually unemployed. It’s colors are cool, not warm, which seems to refute the warmth that Christmas brings to people in the dark of winter. It shows a vacant building, which seems symbolic when one considers that Obama invariable answer to all the scandals revealed in the past year is to disclaim knowledge or responsibility. And lastly, despite going out at Christmas time and despite Obama’s claims to be a Christian, the card makes no mention of Christmas. Keep in mind with this last point that the card ostensibly comes not from “the government” but from a man and his family.

Nor does it mention Christ, which doesn't surprise me in the least.

This might be an unpopular opinion here, but this is a nice card that is agreeable to everyone. Why criticize it during the one season of the year where we all pretend to like each other? As much as I disagree with many of Obama's policies, he is a nice president. Believe it or not, it is okay for us Republicans to say so occasionally. Merry Christmas to you.

"As much as I disagree with many of Obama's policies, he is a nice president.


A nice President? He is the most lawless President since Nixon and should be impeached at the very least.