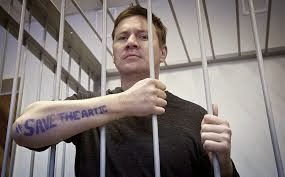 Sadly, in America he would likely had his diet accommodated.


A Greenpeace campaigner claims he was forced to live on bread and water while being held in a Russian prison because it didn’t offer a vegetarian alternative.
Antony Perrett arrived home yesterday after spending two months in prisons in Murmansk and St Petersburg for trying to hang a climate change banner on an oil rig.
The former town councillor is one a group of environmental activists known as the Arctic 30 who were being held in Russia on hooliganism charges.
Since being released under a new amnesty law, the 33-year-old has revealed he refused to eat some of the food offered to him behind bars.
‘All the prison food had low grade meat of unknown origin in it. I’m a vegetarian and I lost a lot of weight,’ he said from his home in Newport, South Wales.