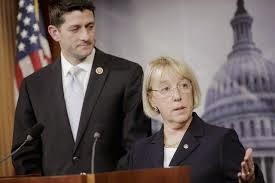 If you don't understand these proposed future spending cuts won't ever happen, just consider what the current deal does to the current Sequester cuts. They are being gutted. These proposed cuts would have to survive another 8 budget years and several new budget deals. It all a fantasy and Ryan is an idiot for agreeing to it. No wonder Barack Obama approves.


The budget deal announced Tuesday by Rep. Paul Ryan (R-WI) and Sen. Patty Murray (D-WA) would boost federal spending by around $65 billion over the next two years. This new spending is offset by increasing user fees, boosting pension contributions by federal employees and the military, and other minor changes. Ryan and Murray also say that the deal will reduce the deficit by $23 billion over the next 10 years. This reduction, however, doesn't start until 2022.

According to a 4-page summary document of the deal obtained by Breitbart News, "[t]he budget proposal saves $28 billion over ten years by requiring the President to sequester the same percentage of mandatory budgetary resources in 2022 and 2023 as will be sequestered in 2021 under current law."