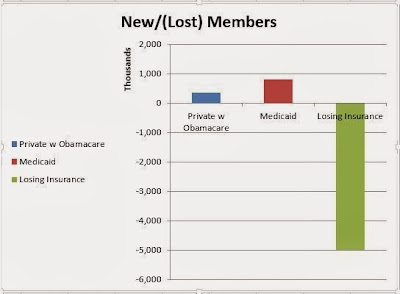 
Insurers privately tell Bob Laszewski that they think more people will have lost insurance by January 1 than the number who have signed up for Obamacare by January 1.
“I was out making some client calls this week with a number of different carriers and they know exactly how many policies they canceled and how many who reupped. And they know how many people have come in through the exchange,” says Laszewski. “And I didn’t find one of them who thought they were going to be net ahead on January 1. They all think they’re going to net behind on January 1. That’s where it’s trending so far.”
So far, at least 4.8 million Americans have received insurance cancellations notices, but Laszewski predicts that the total Obamacare enrollment will be less than half that number on January 1.
“My guess is that we’ll have somewhere around a million and a half people signed up for Obamacare on January 1 in the states and in helathcare.gov,” he says. The big question then, he adds, is “why have we gone through this whole dislocation of the American health insurance system if only a million and a half to two million buy health insurance?”