Some on global warming research ship stuck in Antarctic ice to be rescued by helicopter... 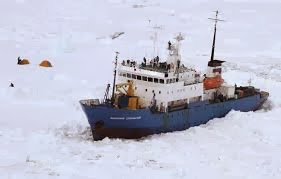 What? The ice isn't melting?


The Australian icebreaker Aurora Australis today failed in its second attempt to free the Russian-registered ship -- which has been stuck since Christmas Day with 76 people aboard.
"The Australian Maritime Safety Authority's Rescue Co-ordination Centre was advised this morning by the Aurora Australis that the ship will not be able to reach the MV Akademik Shokalskiy," AMSA said in a statement.
"The Aurora Australis advised RCC Australia it would be at risk of becoming beset by ice itself if it continued to make further rescue attempts."
The latest weather forecast for the area is of possible heavy snow and rain as well as possible fog and poor visibility.
The AMSA spokeswoman said 52 scientists and passengers would be evacuated from the ship in a helicopter based with the Chinese ice breaker Xue Long.