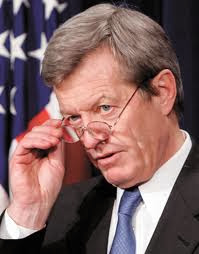 Sen. Max Baucus was key to getting Obamacare passed through the Senate. He would have faced a tough challenge if he ran for re-election.


The White House is set to select outgoing Sen. Max Baucus (D-Mont.) as its pick for ambassador to China, Sen. Orrin Hatch (R-Utah) and a Baucus ally confirmed Wednesday.
Baucus, 72, previously announced that he won't seek reelection to the Senate in 2014.
Senate aides familiar with the plans said that the move has been in the works for several days.
The news was first reported by Politico. Baucus aides declined to comment Wednesday evening when asked about it outside the Senate Chamber.
As chairman of the powerful Senate Finance Committee, Baucus played a key role in crafting President Obama's health-care law and was among the first Democrats to publicly fret about the law's implementation -- worries that later turned out to be well-founded.