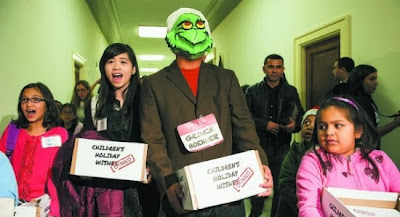 Here is a helpful hint to immigrants. Immigration reform will require bipartisanship. Stop voting 70+% democrat and you can get most of what you want.


Immigration reform advocates have tried being polite. They’ve staged acts of civil disobedience and warned Republicans the party will pay at the ballot box if they drag their feet on an overhaul.
But none of that has worked — so now, immigration activists are in all-out harassment mode.
In recent weeks, advocates have taken a decidedly sharper, more aggressive turn in their efforts to pressure lawmakers — primarily Republicans — on an immigration overhaul that would create a pathway to citizenship for millions of undocumented immigrants in the country.
They stormed House Majority Leader Eric Cantor’s (R-Va.) condo in Arlington, Va. They delivered reams of letters to House Majority Whip Kevin McCarthy (R-Calif.) and dozens of other House Republicans from children of immigrant families. They’ve confronted Speaker John Boehner (R-Ohio) during breakfast at his favorite Capitol Hill diner and prayed on the doorsteps of his suburban Cincinnati home.
But, so far, the in-your-face strategy isn’t working. After the Senate passed the most comprehensive immigration overhaul in a generation in June, the effort has stalled. And the tough tactics are turning off key House GOP lawmakers whose support will be vital if legislation is to clear Congress.