Flashback: Komen canceled many events in 2013; citing 37% drop in participation... 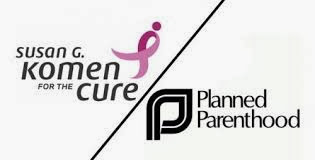 Komen canceled many events in 2013; citing 37% drop in participation. They blamed it on the economy, but much of the backlash is likely from abortion opponents who are disappointed with Komen's decision to continue funding Planned Parenthood. Komen made a serious mistake in caving to liberal's demands. Conservative give much more to charity.


"Participation levels over the last four years have made it difficult to sustain an event of this magnitude in 14 cities."
Komen spokeswoman Andrea Rader said the events had seen a 37% decline over the last four years but acknowledged that the drop was "a little more dramatic" last year.
Following the February 2012 outcry over the group's decision to cut its contributions to Planned Parenthood, which provides a range of health services to women including abortion, Komen reversed its decision.
Ms Rader said the "vast majority" of people had moved on from the controversy.
"There are some folks who will never be back and we know that, and we hope that they will support breast cancer charities because the work's important," she said.