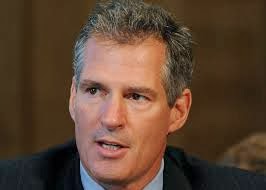 The RINO is strong in Scott Brown, but he would be better than demo Jeanne Shaheen.


LONDONDERRY, N.H. — The trademark pickup truck rolled up to the Harold Square restaurant here one rainy night last week and out popped Scott P. Brown, the former senator from Massachusetts. He had been a senator for only three years, but that was long enough to whet his appetite for more.

But for more what, precisely? Mr. Brown, a noncandidate in perpetual campaign mode, is not saying.
He is openly toying with some options, like running for the Senate next year in New Hampshire. He has also visited Iowa to test the presidential waters and may be positioning himself as a potential vice-presidential pick. Not under consideration, apparently, is any office in his home state of Massachusetts, where a Senate seat is also up next year.
“I know there’s a lot of curiosity and interest as to what my future plans are,” he told reporters waiting for him in Londonderry, where he was the main attraction at a meet-and-greet with local Republicans. “Nothing’s really changed since the last time we’ve seen each other, which is more often than not.”
That is to say, while he has made numerous visits recently to New Hampshire, where he has long owned a vacation home, he still has not decided whether to challenge Senator Jeanne Shaheen, a Democrat, who is seeking re-election.