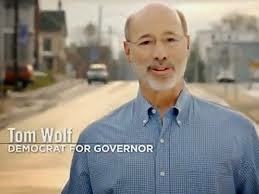 This should help him get a big bite of the cannibal vote...

Pennsylvania gubernatorial candidate Tom Wolf has had to pull a campaign ad after it emerged that the actor vouching for his stint in the Peace Corps also appeared in a cannibal fetish film.
Democrat Tom Wolf's advertisement featured Alan Benyak, 50, sitting on the hood of a Jeep and talking about Wolf's time in India.
Benyak has many strings in his bow - he's an attorney who was a Democratic candidate for judge in Washington County, he served in the U.S. Army - and he's something of an actor.