A New York rally of socialists and pro-illegal immigrant forces featured signs with swastikas and calls for death to their political opponents. The New York Times, MSNBC and many other mainstream news outlets covered the May Day protests.

Here are some of the protest pictures the MSM chose to display.(captions are mine)

"My Dreams are not illegal" from the NYT. 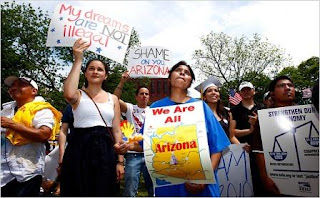 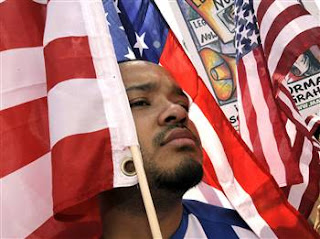 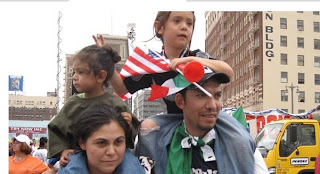 None of the many pictures or text found at the articles associated with the above pictures had anything but glowing depictions of the protesters. Now, let's see what they missed.

"Protesters with Swastikas" at Times Square via Andrew Berman. 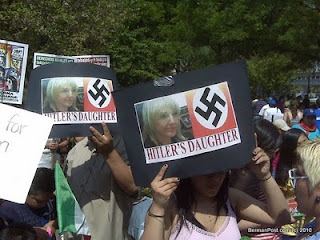 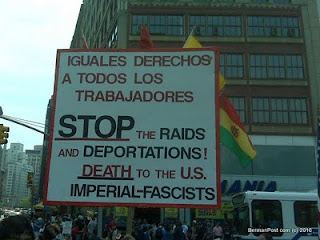 Andrew Berman has many more pictures of the Times Square rally. Many feature communist themes. There were more Mexican flags than US flags. Reportedly, the rally was held predominantly in Spanish. The crowd size was about 2000. There is no way the mainstream media missed the 'hateful' signage in a crowd of that size. Instead, they chose to ignore it and accentuate the positive. When one swastika sign shows up at a Tea Party rally of thousands, the mainstream media uses it to highlight their story. Here is how CNN spun last September's 912 rally of more than one hundred thousand patriots as an "angry" group of radicals. 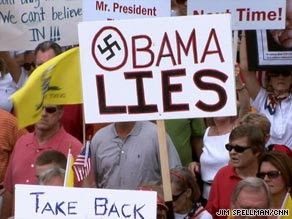 We all know signs like this were very hard to find among the tens of thousands of signs at September's 912 rally in Washington or any other Tea Party rally for that matter. This kind of dinosaur mainstream media spin and blatant bias is why FOX News ratings are skyrocketing as viewers abandon the NYT, MSNBC, CNN and others.
Posted by Bluegrass Pundit at 8:28:00 AM

The lamestream media has no shame.

I'd really like to see the THUTH in the media sometime.

I'd really like to see the TRUTH in the media sometime!