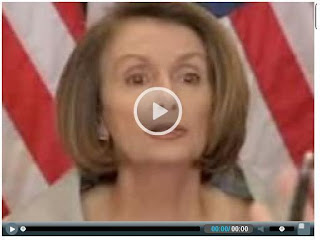 At first Democrats tried to blame Dick Cheney for the gulf oil spill, but they must have had a "secret" meeting and decided the strategy is to blame Bush. Why not? They have blamed everything else on him. The 'blame Bush' strategy was launched earlier this week by Chris Dodd. Yesterday, it was Nancy Pelosi's turn.

Who care what Pelosi thinks. She is a complete partisan.