Here is how the BBC reports the situation in Gaza. The UN uses the words "grim" and "medieval." (accent mine)

The blockade has been widely described as "collective punishment" resulting in a humanitarian crisis; UN officials have described the situation as "grim", "deteriorating" and a "medieval siege", but Israel says there are no shortages in Gaza, pointing to the aid it allows in.

In particular, the BBC cites shortages of building materials that make construction of homes and schools impossible.

The UN says restrictions on cement have made the reconstruction of 12,000 Palestinian homes damaged or destroyed in Israeli military operations "impossible".

It says it has not been able to build schools to house 15,000 new pupils, necessary because of population growth since the blockade began.

Keep the "shortage of building material" and "grim" description in mind and check out this photo from a new mall that just opened in Gaza. 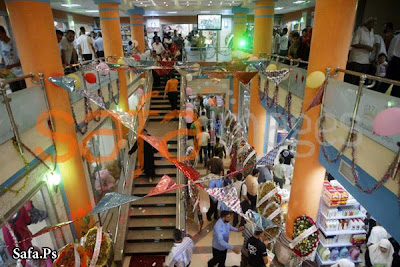 Here is the Olympic sized swimming pool that opened in Gaza this year. 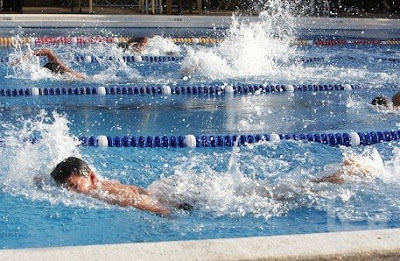 So, they have a new mall and Olympic sized swimming pool. What about claims they are short on food?

Aid agencies operating in Gaza say they have largely been able to continue to transport basic supplies such as flour and cooking oil into the territory.

But the UN's Food and Agriculture Organization says 61% of Gazans are "food insecure".

According to the UN agency for Palestinian refugees, Unrwa, 80% of Gazan households rely on some kind of food aid.

Unrwa provides food aid for 750,000 people, half the population.

Its food distribution has been suspended several times since June 2007 as a result of border closures or fuel shortages.

Here is a recent photo of a fruit and vegetable market in Gaza. 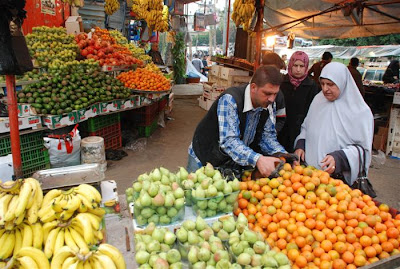 There are serious problems in Gaza. The unemployment rate may be as high as 38.6% and many people lack the money to buy the goods that are available. However, that isn't Israel's fault. The blame for the poor economy lies with the government of Gaza. Business don't want to open in a place where armed gunmen will be launching rockets at a neighboring country from their parking lot.

You can read more about the Gaza blockage deception perpetuated by the liberal mainstream media at Tim Gross Media.
Posted by Bluegrass Pundit at 11:24:00 AM

It is heartbreaking to read this article on all the peace, happiness and outright joy being experienced by the people of Gaza. Can self-deception possibly be carried any farther than this?

Allow me to instruct you, sir: kindly read the actual words and experiences of the suffering people there and then make a judgment. Don't rely on the well-oiled (and well-heeled) Israeli propaganda machine to do your thinking for you. Begin, for example, by reading some of the material posted by Catholicism.org. These are not the ravings of liberals but of serious people who know what is going on over there and are not being led by the nose by the Zionists - the same Zionists who are in TOTAL, repeat TOTAL, control of both houses of Congress.

I am sure that you mean well (at least I hope so) but as the kids say, "get real". What is being done in Gaza and elsewhere in the Holy land by the Zionist occupiers is a crime against humanity, and I, as a Catholic, will stand by that statement any day of the week and twice on Sundays.

"It is heartbreaking to read this article on all the peace, happiness and outright joy being experienced by the people of Gaza. Can self-deception possibly be carried any farther than this?"

I make no claim there is peace, joy and happiness in Gaza. I do take exception to the severe blockade criticism Israel has received. If there isn't enough concrete for houses and schools, what kind of government allows malls to be built? The misery in Gaza is directly tied to poor leadership by the PLO in the past and Hamas now.

Most people do not realize that exports are being blockaded from Gaza as well. This which is another big factor in damaging their economy.