Keith Olbermann tweeted this at a conservative tweeter Sunday. 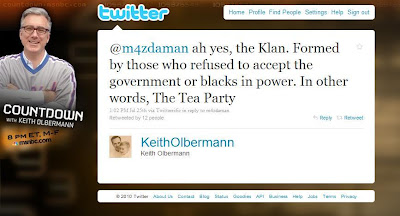 The attempt to brand the Tea Party as racist continues. Perhaps Olbermann only thinks associating someone with the Klan is a bad thing if they are Republicans or oppose Obama's policies. . He spoke buoyantly about former Sen. Robert Byrd's early life Klan membership. In this video of his comments shortly after Byrd's death, he seemed mainly concerned about how losing a Senator would affect the Democrats plans to pass their financial reform bill.