Obama Plans Yet Another Vacation 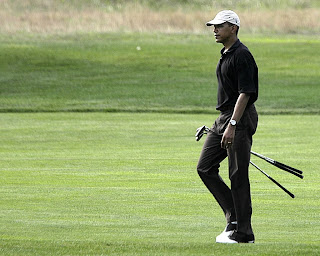 Does Obama do anything besides plan vacations? Do you remember when Bush was criticized for going to his home in Texas?

President Barack Obama is taking his family back to Martha’s Vineyard, Mass., for summer vacation next month.

The White House announced the vacation plans on Friday, one day after disclosing that the Obamas would overnight somewhere along Florida’s oil-threatened Gulf Coast on the weekend of Aug. 14.

The Obamas are scheduled to arrive on the Massachusetts island on Aug. 19 and return to the White House on Aug. 29.

Hey, give him a break. It takes a lot of work to destroy the Republic.

"Hey, give him a break. It takes a lot of work to destroy the Republic."

We're going to see if a DEMOCRACY actually works!!!!