Scott Brown: “Why is it that I’m always the one that has to vote with the Democrats?" 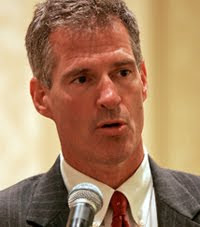 Actually Scott Brown doesn't have to "always the one that has to vote with the Democrats?" He can stop being a RINO any day he wants to.

Scott Brown, with some justification, makes frequent claims to bipartisanship. But as the Republican senator from Massachusetts prepared to cast another vote next week against an extension of benefits for jobless Americans, he expressed frustration. Democrats, he said, never gave his alternative plan to extend benefits a serious look.

“Why is it that I’m always the one that has to vote with the Democrats?’’ Brown lamented. “Bipartisanship is a two-way street, you know? Why can’t they also work together to pay for these things within the budget, within the monies that we already have? Why is it that we always have to add to the deficit?"