When President Obama's Cap and Trade bill stalled in the Senate last year, he decided to ignore the will of the legislator and the American people and change the rules to allow EPA to regulate CO2 as a pollutant. When President Obama's health care reform bill was rejected by the American people and stopped by a filibuster in the Senate, Democrats cut backroom deals, held votes in the middle of the night and changed the rules to pass health care reform as a reconciliation bill. Now, President Obama's amnesty immigration reform bill is stalled out in Congress. A CNN poll released in April found two-thirds of Americans were opposed to amnesty for illegal immigrants. Obama lacks the votes in Congress and doesn't have the support of the American people to change Congresses mind. What will he do? Will he abide by the will of Congress and American citizens? President Obama could care less about what the 'little people,' or Congress for that matter, think. He will attempt to ram through his liberal agenda by administrative fiat. Obama will change the rules to give as many illegal immigrants amnesty as possible if he can get away with it.

According to an internal U.S. Citizenship and Immigration Services memo going the rounds of Capitol Hill and obtained by National Review, the agency is considering ways in which it could enact “meaningful immigration reform absent legislative action” — that is, without the consent of the American people through a vote in Congress.

You can read the entire memo at NRO. Here is a screen capture of the first paragraphs. 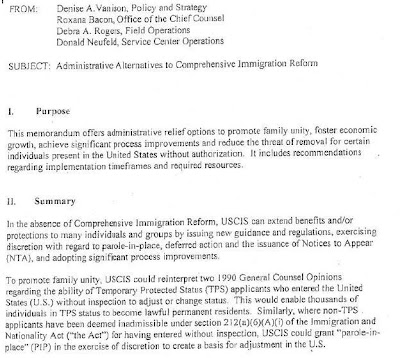