Quinnipiac University Poll: Any Republican Could Beat Obama in 2012 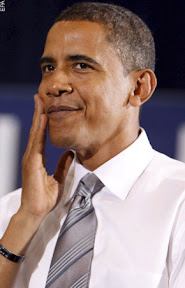 A Quinnipiac University Poll has found 48% of voters don't think president Obama deserves reelection. By a margin of 39 - 36 percent, voters would elect any republican running against Obama.

A year after President Barack Obama's political honeymoon ended, his job approval rating has dropped to a negative 44 - 48 percent, his worst net score ever, and American voters say by a narrow 39 - 36 percent margin that they would vote for an unnamed Republican rather than President Obama in 2012, according to a Quinnipiac University poll released today.

This compares to a 48 - 43 percent approval for Obama in a May 26 national poll by the independent Quinnipiac (KWIN-uh-pe-ack) University and a 57 - 33 percent approval last July, just before the political firestorm created by opposition to his health care plan galvanized political opponents and turned independent voters against him....