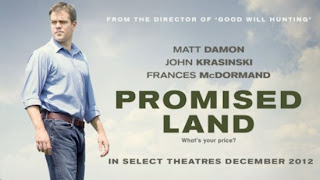 If you have natural gas heat and have noticed that your heat bill has been lower the last two years, you should thank fracking.Ironically, environmentalist oppose fracking, but increased use of natural gas has significantly reduce CO2 emissions in the U.S.


Matt Damon’s much hyped anti-fracking film “Promised Land” has failed to make the impact that its producers and environmental groups had hoped for. As of January 20, “Promised Land” has raked in a whopping total of $7,542,000 since it opened on December 28, according to Box Office Mojo. According to The Hill, the movie cost $15 million to make. Box Office Mojo ranked it 139 out of all movies from Jan. 23, 2012 to Jan. 21, 2013.

Matt Damon said that he didn’t make a biased movie and claimed to have just wanted to start a conversation on the subject. “Nobody wants to go see a movie where they get a message at the end. That really wasn’t our intent. It was just to show this moment in time in our country, and what happens when big money collides with real people, people who are struggling on the back end of a recession.” he told The Morning Call, a Lehigh Valley, Pa., newspaper. Apparently Damon was right about nobody wanting to go see his movie.