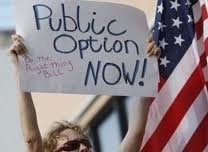 The public option has reared it's ugly head again...


Dozens of House Democrats on Tuesday reintroduced legislation that would amend the 2010 healthcare law to create a government-run health insurance option, or a so-called “public option.”

The Public Option Deficit Reduction Act, H.R. 261, was introduced by Rep. Jan Schakowsky (D-Ill.), along with 44 other House Democrats.

Congress considered the creation of a government-run healthcare plan during the debate over the healthcare law, but it was eventually removed of the final bill that passed in 2010. Schakowsky says bringing it back would help reduce insurance premiums.

“Obamacare is already helping millions of Americans get the health care they need, but it can be made even better,” she said. “The Public Option Deficit Reduction Act will give health care consumers more choice and lower their premiums.”

Her bill would set up a government-run plan that would provide premiums that are 5 to 7 percent lower than private insurance plans. This, she said, would “put pressure on all insurers to lower their premiums in order to compete.”