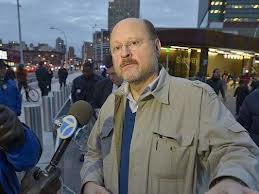 Joe Lhota is a Republican and he is running for mayor...


Lhota said he’d make a great partner in the game of Trivial Pursuit because he has a storehouse of knowledge about a whole lot of things. But there’s nothing trivial about his desire to be mayor of New York City.

“New York is in my DNA,” Lhota told Kramer.

Lhota, who resigned last month as head of the MTA to seek the city’s top job, has both public and private sector experience. He was first deputy mayor under Rudy Giuliani. He is a frank, law and order kind of guy who minces no words. Take the NYPD’s controversial stop-and-frisk program.

“Anyone who says we should eliminate stop-and-frisk really is putting the city in danger,” Lhota said.

He has equally strong views about taxes. They should be reduced or eliminated. As for tickets, the Bloomberg administration gives out far too many of them. Keep on reading...