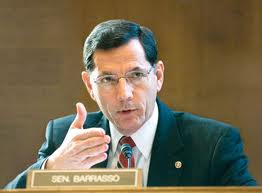 
Sen. John Barrasso (R-Wyo.) said Sunday that he does not believe President Obama’s gun-control proposals will be brought to the Senate floor for a vote.

Speaking on CNN’s “State of the Union,” Barrasso said election worries among Democrats will sideline legislation that could restrict gun ownership.

Obama has called on Congress to institute universal background checks for all gun sales as well as bans on assault weapons and high-capacity magazines, among other items.

“I don’t think Sen. Harry Reid [D-Nev.] even brings it to the Senate floor because he has six Democrats up for election in two years in states where the president received fewer than 42 percent of the votes,” Barrasso said. “He doesn’t want his Democrats to have to choose between their own constituents and the president’s positions.”

The White House has recognized that passing gun-control legislation will be tough, though they are confident, anger over a mass shooting at an elementary school last month has shifted the public debate.